Learn how to manage your grantee profile, applications, and grants.

What information is required by Open Society Foundations in order to transfer a grant payment?

This article summarizes frequently asked questions about banking information that we need in order to send funds for awarded grant applications.

When creating a bank account record, be sure to enter required fields and mark the "Bank account is valid" box. Save. 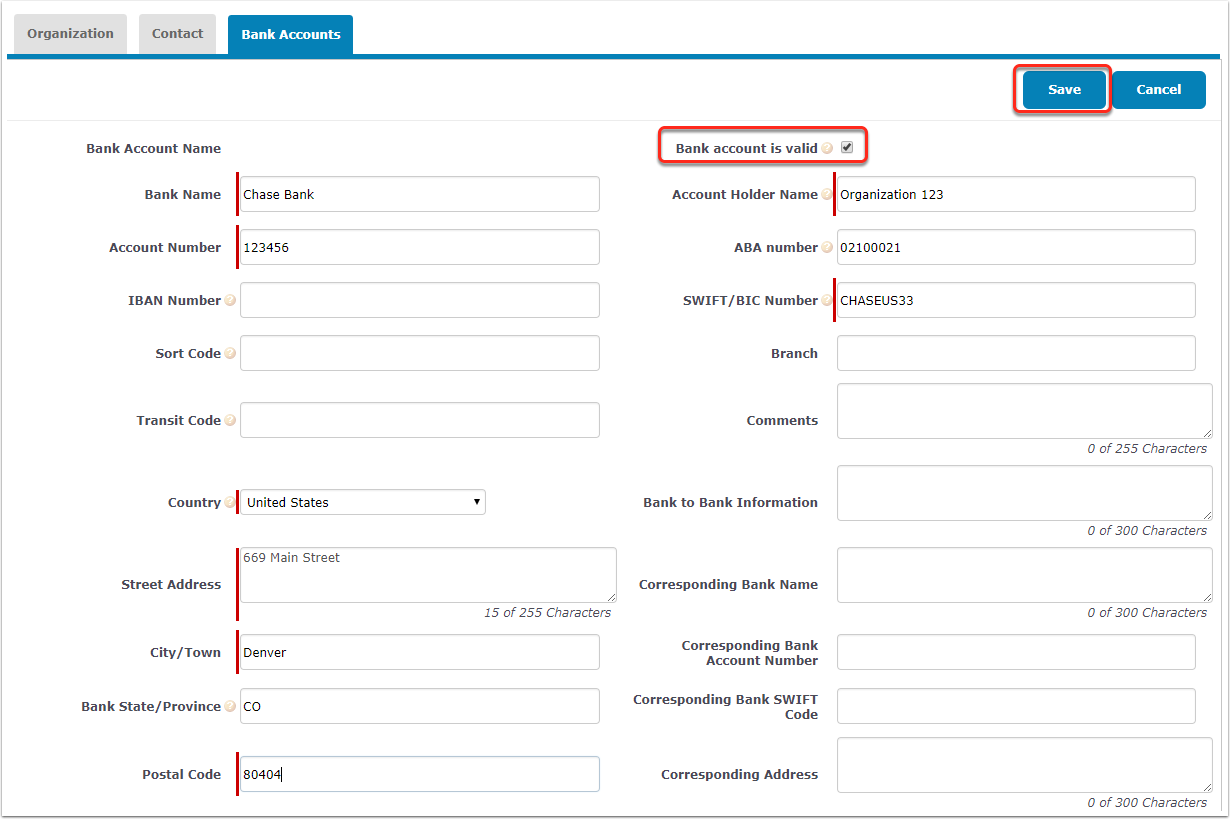 When entering the account holder name, please do not use special characters or non A-Z or 0-9 characters. Please replace letters with diacritical marks like these: À, Á, Â, Ã, Ä, Å, Ă, Ą, Ā, Ç, Ð, Ø with letters without the mark or accent.

This field integrates into our banking file, and causes a delay in payment if special characters are used.

Do you see fields that don't look familiar? Here are definitions for some of the information we might ask for on your bank account in order to make payment.

What are ABA and SWIFT codes?

ABA and SWIFT codes convey what bank a wire should be sent to.

An ABA number (also known as routing number or routing transfer number) is a sequence of nine numeric characters used by banks to identify specific financial institutions within the United States.

Swift Code is a standard format of Bank Identifier Codes (BIC) and it is unique identification code for a particular bank. These codes are used when transferring money between banks, particularly for international wire transfers. Banks also used the codes for exchanging other messages between them.

What does an ABA look like? Is it the same as the routing number?

Banks located in the United States use ABA or routing codes. An ABA code is 9 digits, all numbers.

As you can infer from the examples, some banks have a universal ABA for all branches, while other banks may use different ABA’s for different branches.  Therefore, don’t be surprised if two wires to the same bank may have two different ABA numbers.

What does a SWIFT code look like? Is it the same as a BIC number?

SWIFT codes are 8 or 11 digits usually have the following format:

C= The Country Code (Examples: GB for the United Kingdom, DE for Germany, FR for France)

k= The “check” code, two digits or letters (there is an algorithm for how to determine the check code, but it’s so mind-numbingly esoteric it’s not worth going into here)

B= The Bank Information Code (or “BIC”).  It is usually a 4-letter abbreviation of the bank (Examples: BARC for Barclays, LOYD for Lloyds, CITI for Citibank).

Do note that sometimes the four letters don’t look at the bank at all (For example:  MIDL for HSBC bank, which is due to the fact that Midland Bank was bought out by HSBC, but they never bothered to change the BIC)

An example of some SWIFT codes:

BARCGB22XXX (This is going to Barclays in the United Kingdom, main branch)

BARCGB22  (essentially the same as the one above it)

BARCGB2103B (This is also going to Barclays in the United Kingdom, but specifies a branch)

What if I only have a SWIFT code for a US Bank?

If your bank has only provided you with SWIFT information such as:

Our finance department is often able to use this information to look up the ABA number, but if no ABA is available, a SWIFT can be used.

What if my US Bank (or Credit Union) doesn't have a SWIFT code?

If your bank or credit union does NOT have a SWIFT or BIC code, then use the following in the field:

The format varies from bank to bank, but is usually 6-26 digits, mostly numbers but on rare occasions use letters.

What is an IBAN?

Is an IBAN required for all wires?

For wires to US banks (from other US banks, which is the case with US), IBANs are not used.

For wires to European banks and some other banks, the IBAN is required. Follow these external links to see where IBAN is mandatory and recommended.

The format of an IBAN number varies by country, and a complete list can be found here: http://en.wikipedia.org/wiki/IBAN#List_of_valid_IBANs_by_country

Don’t be overwhelmed by this listyou need not memorize every format of IBAN.  The important takeaway is understanding roughly what it looks like so you can find it on the mess of numbers your vendor, consultant, or grantee gives you from their bank: an IBAN number is usually a 15-31 digit mixture of numbers or letters, with the first two letters being a country code.

Some generic examples to get a feel for what they look like:

What is a SORT code?

Banks in the UK require one additional piece of information for a wire to go through: a 6 digit code called a Sort Code.

In practice, the banks are never that proactive, and are known to reject wires for missing a Sort Code even though they have the IBAN.  For this reason it is best practice to be redundant and include the Sort Code as a separate line.

What is a Transit Number?

On March 27, 2020 we signed A Call to Action: Philanthropy’s Commitment during COVID-19 and the European Philanthropy Statement on COVID-19 to act with urgency to support our grantees, as well as the people and communities hit hardest. The commitments we have made include loosening restrictions on current grants where possible.

In keeping with this commitment, we encourage current OSF grantees whose work is being impacted to request grant amendments enabling them to adapt their work and plans to this evolving situation.

US Sanctions Compliance and OFAC

A brief introduction to US sanctions laws and regulations.